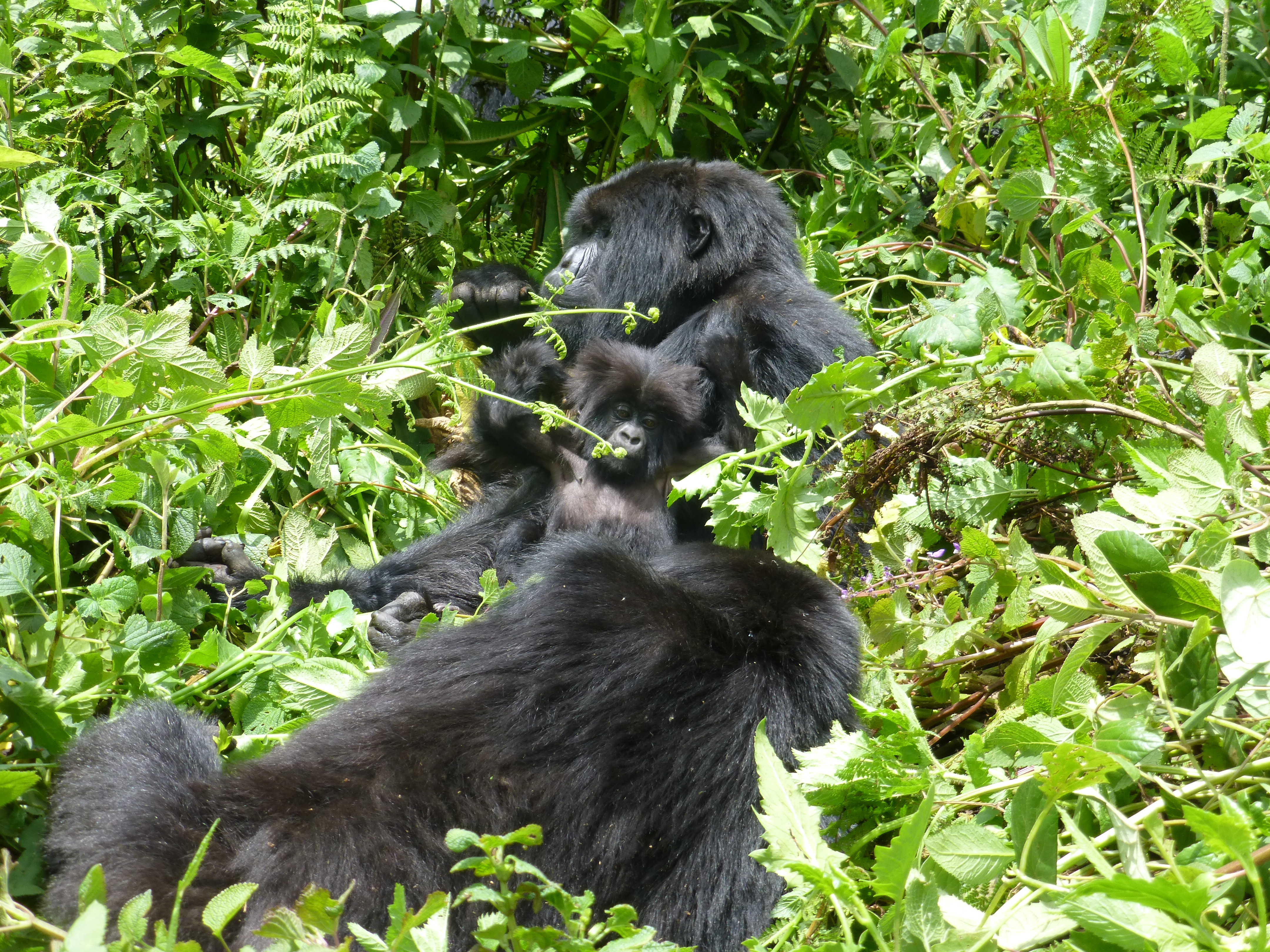 The park is located in the northern district of Musanze, was recognized in 1925, making it the oldest national park in Africa.

It is part of the Virunga Conservation Area covering 125 km² and which spans to Democratic Republic of Congo and Uganda, continuing to Virunga National Park and Mgahinga Gorilla National park respectively and has five Virunga volcanoes that Sabyinyo (3.674 m), Gahinga (3.474 m), Bisoke (3711 m), Muhabura (4.127 m), and the Karisimbi which is the highest volcano at an altitude of 4.507 meters above sea level. All these five volcanoes are extinct and the active ones are in Congo with Nyiragongo which erupted in January 2002 and Nyamulagira in July 2002.

Below are the best activities in Volcanoes National Park in Rwanda

1. Gorilla Trekking or Gorilla Tracking
Gorilla Trekking or Gorilla tracking is the most popular activity in Volcanoes National Park in Rwanda. Mountain Gorillas are highly endangered and can only be found in three countries in the whole world. These are Rwanda (Obviously), Uganda and DR Congo. Tracking Mountain gorillas on the slopes of the Virunga volcanoes is an experience that cannot be compared to another. The tracking is highly guided by a great team of rangers, guides and porters who make sure that you have a magical experience. The trek starts by a briefing at the park offices with a cup of Rwanda coffee and entertainment from the cultural dancers.

There are two habituated troops that can be tracked with the guidance of rangers and guides. The track allows visitors to come up close learning more about them and taking their beautiful photos.

The activity can be combined with gorilla tracking and or with other activities in the park. It starts in the morning at 8am with a briefing.

Golden monkeys are highly endangered and could face extinction. They can only be found in the Virunga mountain ranges of DR Congo, Mgahinga Gorilla National park in Uganda and Rwanda. They mostly live in the bamboo forests.
The largest habituated troop lives in the Sabyinyo are and has about 80-100 members and this is the most visited troo.

There is no age limit for Golden Monkey tracking and can be done throughout the year.

4. Iby’lyacu Cultural village
After you gorilla trekking in Volcanoes National park, you can visit Iby’lyacu Cultural village. You will learn about the cultural of Rwanda that includes music and dances and learning about herbal medicine that the people used before modern medicine, learn ways of the ancient Rwanda Kingdom. Visitors will be welcomes by the beautiful sounds of drums and joyful dancers. Most of the dancers and performers at the village are ex-poachers. The activities at the center are interactive and can be enjoyed by visitors of all ages.

5. Bird Watching
Volcanoes National park is home to many birds and butterflies which can be explored on guided bird watching trails, by a knowledgeable bird watching guide.

6. Bisoke Hike
Take a hike to Mount Bisoke, one of the Virunga Volcanoes. Although challenging, this hike offers great views especially of the beautiful Crater Lake at the top. Bisoke Mountain peak is at 3,000 Meters above sea level.

8. Visit the twin lakes:
Go for a visit to the twin lakes Bulera and Ruhondo located a stone throw away from Volcanoes National park. They offer breath taking sceneries

There are about 5 habituated gorilla families in Volcanoes National Park that can be visited during gorilla trekking. These are;

Some of the Gorilla trekking requirements in Volcanoes National Park

Cost of Activities in Volcanoes National Park in Rwanda

The costs of the activities are per person.

March to May – These are long rainy months and gorilla trekking in Rwanda and golden monkey trekking is a bit challenging. Few travellers visit the park around this time and the advantage of this is it always feels like you own the whole park.

June to Mid-September – These are dry months which makes it the best time for gorilla trekking and golden monkey trekking. Hiking through the forest is much easier but you will still need a rain jacket, water proof shirts and hiking boots since it can rain anytime in the forest.

October to November – October and November are also rainy months but short rainy months. Trekking in the park may be a bit touch too.

December to Feb – These are also dry months and favourable for visiting Volcanoes National Park. This time is also the best time for gorilla and golden monkey trekking. So many birds can be seen around this time and most of the trees flower too.

The vegetation is still very green and the skies very blue.
We recommend photography safaris in Rwanda around this time.

There are many accommodation options for each traveller. One can choose to stay in luxury lodges like Bisate Lode, Sabinyo Silverback Lodge, Viruga Lodge, Gorilla Nest Lodge and Five Volcanoes Lodge.

And the budget lodges include Hotel Muhabura, Kinigi Guest House, Virunga Hotel among others.

How to access the park.
The park can be accessed by road transport. It is about 3 hours from Kigali aiport or town to Volcanoes National Park. We use 4 x 4 WD safari vehicles; either safari vans or safari land cruisers
The park can also be accessed by charter flights and helicopters.

There is also a special discount for a person visiting all the three national parks in the months of May to November to track gorillas for $1050 and $1275 for any delegate that is in Rwanda for conferences and meetings. There is also another offer of $5000 for 3 consecutive days Mountain Gorilla filming and professional photography then $12,000 for filming and photography crew per day (maximum 8 people).

You can book your permits directly through this website. Simply mail us on: info@gorillalinktoursafrica.com and we should be able to respond to you within a few hours of time.